This recipe is a variation of what my mother used to make. She used limes or lemons instead of vinegar in her salad dressings. I kept the limes but omitted the olive oil. Omitting the oil has the added benefit that the extra pickling juice can be used to make a refreshing and pretty Summer drink.

Beetroots don't always look as pretty as the picture but a little washing and brushing does wonders. For best results buy a bunch of uniform sized roots so they cook evenly.

Add enough water to a large pot to cover the beets. Add a teaspoon of sea salt to the water and set to boil.

The tops are edible but we discard them. Cut them off about one inch above the bulb. Trim the excess roots. Wash and clean off the dirt with a brush.

When the water is boiling, add the beets. When the water boils again reduce to medium heat. The beets are done when you can easily pierce them with a fork, about 20 minutes.

While the beets boil, juice the lemons and set aside.

Peel the onion. Cut in half lengthwise from top to bottom. Cut each half into thin slices and set aside.

When the beets are done, remove them from the boiling water with a slotted spoon and allow them to cool. Let the cooking liquid cool as well, we are going to use some of it.

Once the beets are cool enough to handle, using your fingers force off the skin and the one inch tops. 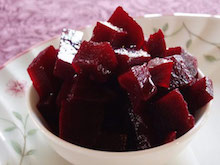 You can slice the beets any way you like. Some people like cubes. I prefer half moons. Cut each beetroot in half from top to bottom then cut each half into 1/4 inch slices.

Put the beets and the sliced onion in a mixing bowl. Add the lime juice and an equal amount of the beet cook water. There is enough salt in the cook water that you don't need to add any more. Add a level teaspoonful of sugar (optional).

Mix well. Put the mixture into clean glass jars with good lids. If there is not enough fluid to cover the beets, top off the jars with beet cook water. Put on the lids and place the jars in the refrigerator. They should be ready to eat in about six hours. They will keep for quite a few days.

After you serve the beets you can dilute the remaining pickling fluid with cold water to made a delicious, refreshing drink. Beetaid!