Stock is best made in quantity and ahead of time. In my dad's hotel there was a two foot tall stock pot on top of the cooking range. It would simmer all day and cool off at night in a never ending succession day after day until they made a fresh batch of stock.

Stock is at the core of good cooking as it goes into everything from soups to sauces and it is also frugal because most things that go into the pot are cuttings that cannot be used any other way. 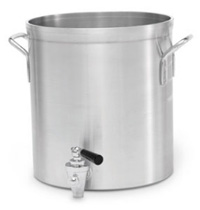 This 120 quart stock pot with faucet is two feet tall!

I accumulate chicken carcasses in the freezer until I have enough to make a batch. If I want a thicker stock with more jelly, I'll buy a couple of pounds of chicken wings. I also freeze the cuttings of all the leafy vegetables, celery and carrot ends, cabbage cores and outer leaves, parsley and cilantro (coriander) stems, broccoli leaves and the hard, stringy part of the stem.


Preparation, Part One - Filling the Pot

I use a ten quart stock pot which yields about two to two and a half quarts of finished stock. Place the chicken and the vegetables in the pot and cover with water. Add onions, leeks, three cloves of garlic, four to six cored sweet chili peppers (the seeds are too spicy), a handful of pepper corns, half a dozen laurel leaves and a coffee-spoonful of sea salt. Let it rest for two or three hours at room temperature to extract the calcium from the chicken bones.

If for any reason you cannot go on to part two, put the pot in the refrigerator until a convenient time.

Make sure the stock never boils vigorously, it should only simmer if you want to wind up with a clear liquid.

While some cooks recommend cooking stock for hours on end, I don't think it's necessary with chicken stock. I let it simmer for an hour to an hour and a half. When it starts to boil, skim off the scum that forms on top.

When done, fish out and discard the vegetables. Place the usable chicken parts is a bowl and let them cool. Specially if you have used chicken wings, there should be enough meat on them to make a nice chicken salad. Filter the stock through a cheesecloth into a large, tall pot. Let it cool to room temperature.

Make sure to use a tall pot with lots of room to spare as otherwise you are likely to wind up with a big mess on your stove top. Also make sure the stock has cooled to close to room temperature as otherwise the clearing process will not work as expected.

Once the stock has cooled, skim off as much fat as you can. I like to clear the stock but you can skip this step as it does not alter the flavor of the stock, just the looks of it.

Wash the eggs thoroughly, you'll be putting the shells in the stock pot. Separate the egg whites, add a bit of water, and beat lightly with a fork. Discard the yolks (or save them for something else). Drop the eggshells in the stock. Add the beaten egg whites to the stock and mix lightly.

Bring the stock to a slow boil. The egg whites will bubble to the top forming a thick scum and trapping all the solids in the stock leaving a clear liquid below. Let it simmer until the scum breaks and you can see that the liquid is clear.

Filter the stock through a cheesecloth into a large, tall pot. Have two or three large glass jars ready and ladle the hot stock into them. Let cool to room temperature and place in the refrigerator. It will keep for at least a week but it's best to use sooner.