The tipping point is that magic moment when an idea, trend, or social behavior crosses a threshold, tips, and spreads like wildfire. Just as a single sick person can start an epidemic of the flu, so too can a small but precisely targeted push cause a fashion trend, the popularity of a new product, or a drop in the crime rate.

From Sticking Point To Tipping Point 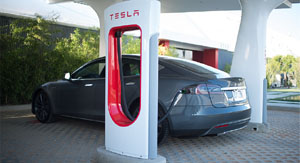 Tesla supercharging station
Complexity is the enemy of adoption. Anything that is too complicated just won't happen. For battery powered electric cars two of the barriers to adoption have been range anxiety and the time it takes to recharge the batteries. There are thousands of gas stations for conventional automobiles and fueling up only takes a few minutes. There is no equivalent infrastructure for battery powered electric cars.

It takes about 40 minutes to charge the battery to 80% of capacity and another 35 minutes to reach full charge. If the next supercharging station in your itinerary is not too distant you can safely leave with less than full charge. Recharging a Tesla takes a lot longer then fueling a conventional car but if you combine the pit stop with a meal or some other activity it should not be a hardship at all.

The Race To Cross America

As the transcontinental supercharging stations were being built, Elon Musk announced his intention to drive coast to coast, West to East, charging up only at Tesla supercharging stations. When John Glenney heard about it, he decided to beat Musk to it but driving East to West. Glenney's cross country journey is reported by Mark Rogowsky in Forbes.

Calbraith Perry Rodgers, flying a Wright Model EX designed for exhibition flights, was the first pilot to fly coast to coast starting on September 17, 1911 from Sheepshead Bay, New York and arriving on November 5, 1911 in Pasadena, California.

First coast to coast flight 1911
Of note to investors, Glenney paid for his Tesla with the profit he made on Tesla stock that he had bought two years earlier at $22.

Technology Adoption Life Cycle (TALC)
Every technology has a hurdle to pass to get into mainstream use. It's called Crossing The Chasm after Geoffrey Moore's marketing book by the same name. New technology is adopted in stages. The technology curious, the "Innovators," try it out because it's fun to try out new things. If they like it a group of "Early Adopters" buy it to try to get an edge on the competition. The next group, the "Early Majority," is much harder to convince. They are pragmatists who want proof of concept but who don't want to experiment like the Early Adopters before them. The "Chasm" is the gap between Early Adopters and Early Majority which often proves fatal. 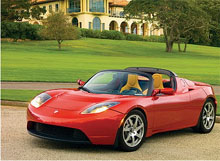 Tesla Roadster
I don't think it's a coincidence that the Tesla car models correspond to the stages of TALC, Elon Musk is a Silicon Valley veteran and Geoffrey Moore is a valley marketing consultant. First there was the Tesla Roadster for the Innovators, built in small numbers for the small number of innovators. For the Early Adopters there is the Tesla Model S. Getting ready for the mass market, the Early Majority, Tesla is developing the Model E.

It looks like a well thought out plan, learning at each stage to incorporate improvements in the next one. But the big hurdle is yet to come, crossing the chasm.

What's Ahead for Investors?

Getting in early is a big gamble that paid off big for John Glenney. While he is an "Innovator" most of us are pragmatists or "Early Majority" in TALC terms. At this point the stock is pricey and the risk of the chasm still lies ahead. For the risk averse investor it's probably best to wait for the chasm crossing which often is accompanied by a large retrenchment in the stock price, often 50%. A reevaluation of Tesla at that point should lead to the investment decision.


The Tipping Point by Malcolm Gladwell
Charge! How A Father-Daughter Duo Gambled On Tesla And Beat Out Elon Musk While Doing It by Mark Rogowsky
Crossing the Chasm: Marketing and Selling Disruptive Products to Mainstream Customers by Geoffrey A. Moore