At a forum I frequent I was challenged to explain why a universal healthcare system is more expensive and less efficient than a free market one. The challenge was posed by an anesthesiologist at a small town clinic.

What if I could convince you that universal health care made economic sense...that if might actually save you/us money?

Adam Smith knew that markets worked but he didn't know how or why so he invented the "invisible hand" to account for it. In the 240 years since The Wealth of Nations we have learned about the workings of markets. The things that we discovered include that markets are complex systems meaning they are not predictable in detail but we do know the kinds of effect that inputs have on prices and availability of goods and services.

What do you think happens when someone without insurance (or the ability to pay out of pocket) gets appendicits? Do you think they just stay home and die?

Think again. They come into the hospital, get taken care of, and then they don't or can't pay their bill. The hospital and staff "eats" the expense. Next time you look at your hospital bill and see the $10 charge for aspirin, you'll understand why. The hospital needs to meet their expenses.

In other words, you are already paying for their care through your higher insurance rates needed to cover those who didn't pay.

Now think about it: if no one had to avoid getting care because of money, they would get their health problems taken care of early, and at less expense. I promise you, waiting until things are unavoidable (like not getting your blood pressure treated until you show up with a stroke) is vastly more expensive than pre-emptive care.

Your example is just one data point -- anecdotal to boot because you don't know the costs involved -- insufficient to come to a definitive conclusion. It also contains a conjecture (bolded by me) that I will show to be false. 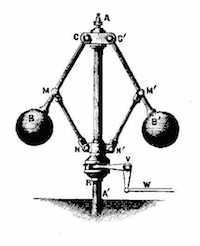 The faster spin pushes the weights outward and slower spin lets them drop. This movement is used to control the fuel supply keeping the machine at a constant speed.

An easy to understand "positive feedback" is the screeching of audio systems when the mike is placed too close to the speakers. The mike picks up the increasing volume feeding it right back into the amplifier and out the speakers.

Every input to the market is either positive or negative feedback. If I don't buy something today that's negative feedback, please lower the price if you want me to buy. If the government gives a subsidy that's positive feedback designed to amplify production. Once you think in terms of feedback you understand how the invisible hand works. This is how the law of supply and demand works. The law of supply and demand is the market governor.

What seems miraculous about supply and demand is how millions of independent transactions filter through the system to set prices. I doubt anyone has yet been able to model how that happens, but it happens in every free (independent transactions) market system. The end result is the optimum distribution of scarce goods and services from a cost point of view. The problem is that this distribution might not be socially acceptable and society will insert new feedback to change the shape of the distribution. No matter how noble the intentions, the end result is a less cost effective market.

In an unregulated market the feedback comes from millions of independent transactions. Add extraneous feedback and the economic efficiency drops. I've been pondering for years why the American healthcare system is so expensive. Blaming it on price gougers is not a good answer even if it is part of the answer. One has to dig deeper, search for the causal feedback gone amok. My observations lead me to believe that paternalistic employers were at least part of the problem (see link below). By improving their worker's lot they changed the feedback entering the market creating unexpected distortions one of which was to reduce the efficiency of the market, in other words, by making stuff more affordable for their own workers they shifted the burden to the rest of the market participants.

My first employer, IBM, gave me free healthcare insurance. I didn't have to worry or even think about healthcare costs. My bit of negative feedback disappeared! I want the best, let the free insurance deal with it. With changes in the economy and in the labor market, paternalistic packages (except for higher management) became too expensive. By this time, since the cost of healthcare was basically unknown, the visible culprit of high healthcare costs was the insurance industry. In fact, the healthcare insurance industry itself had been derailed. The purpose of any insurance is to protect wealth. Fire insurance can't protect a home from fire, it can only protect the owner from the cost caused by the fire. Healthcare insurance originally was designed to protect against the cost of unexpected medical care under the assumption that the ordinary health maintenance costs were to be included in the ordinary household budget like rent and other services. Unfortunately the insurance coverage morphed from the transfer of risk of high cost medical treatment to prepaid medical care. That is clearly not the purpose of insurance but it sure makes premiums go up and is highly profitable for insurance companies. But is also alters the feedback the market receives as the payer is not the patient but the insurer.

One easy remedy for the broken healthcare insurance industry is high deductibles which cause the patients to inject feedback into the healthcare industry, feedback that has been sorely lacking for years. Everybody should be a payer!

Another reason for the escalation of healthcare costs is the escalation of the standard of care. A very long time ago I asked my cardiologist about angiograms. He said they should be used only as a last resort because the procedure damages (scratches?) the arteries. He also said that often the angiogram is ordered because the cardiologist doesn't know how to read the electrocardiogram. I thought this was rather far fetched but time proved him right. In 1997 I had a severe coronary blockage that required angioplasty and a stent. While waiting to see the doctor who did the procedure I listened to a couple of ladies in the waiting room talking about their husbands getting angiograms. They confirmed what my doctor had said, the purpose of the angiograms was to pinpoint the problem areas which, according to my doctor should have been clear from the electrocardiogram.

Be that as it may, in 2012 I had a stress test with some pain in the side of the chest. The doctor wanted to perform an angiogram. I got the information I needed for the procedure. When I asked who would be the doctor performing it, it turned out to be the same one who had given me the stress test. I decided that I needed a second opinion. The second opinion was that while it was the "standard of care" procedure it was not urgent. No angiogram was performed.

Here again high deductibles are your friend, they force you to make a better evaluation of your situation, they give you back control over your health, over your body.


From The National Review Institute

The strange thing is that a great many workers liked — even loved — those company towns. Some of them were awful and exploitative, but many were at least partly philanthropic expressions of Progressive-era utopian idealism, “conscious capitalism” before its time. In the United Kingdom the Cadbury company, which was owned by a reformist Quaker family, founded Bourneville, a company town built with an eye toward helping Cadbury workers achieve a standard of living that they could not secure on their own, with high levels of municipal services, better public hygiene, tidy subsidized housing, recreational facilities, etc. — and no pubs. In the United States, the Pullman Company was famous/infamous for its company-town paternalism.