Democracy by Consent of the Military


Democracy by Consent of the Military

For a democracy to work all parties have to accept the rules of the game. A most telling example is that the British call (or called?) the opposition "Her Majesty's Loyal Opposition." The elephant in the china shop is the military, a good reason for the secretary of defense and the commander in chief to be civilians. 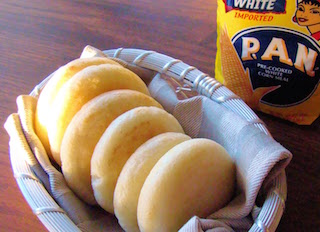 Arepa, the Venezuelan cornmeal bread
In Venezuela both rules are broken. Some sixty years ago the then leader of the majority party asked his followers who their most dangerous enemy was. He got a chorus of standard replies "The Yankees, the capitalists.!" "Wrong! Our biggest danger comes from the military" was his reply. From that meeting sprang up the policy known as "el bozal de arepa" (the bread muzzle). Politicians would allow the military to buy as many toys as needed to keep them happy and in their forts. In Venezuela the secretary of defense has always been a general and this separations of powers broke down completely when Chavez, a military commander, won the presidency. Venezuela has been a de-facto military dictatorship since 1998.

Why am I making the above emphasis? Because the President of the National Assembly last night practically begged the military to side with the opposition. The fly in the ointment is that the "bozal de arepa" has been made so extensive that the military now controls the most lucrative activities in Venezuela from drug trafficking to food imports. When Maduro needed a "Tzar" to turn around the economy he didn't call on our most successful businessman (the CEO of the company that makes the Harina P.A.N. shown in the illustration) but on a general.

The dismantling of democracy started as early as 1998 when civilian gun permits were revoked in the name of public safety but with the real purpose of eliminating armed resistance by the people. A second and even more powerful blow was the packing of the Supreme Court with Chavez acolytes. The method was simple, they doubled the number of magistrates and appointed friends to the new posts. Now there was a new balance of power, a seemingly democratic one but dictatorial in practice.

This week's self-coup d'état was orchestrated with the help of the illegally packed supreme court and it will be enforced by the military. The mood in the streets is mostly how to survive another day. People have lost faith in both government and opposition.