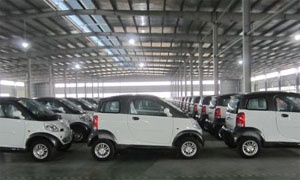 The policy is hot, but the market is cold

"The policy is hot, but the market is cold" is how a Chinese industry spokesman described the problem facing electric vehicles, the public is not buying.

The core problem is the battery. A battery is no match for a tankful of gasoline in energy density meaning reduced driving range. Recharging the battery is time consuming, no match for a quick fill-up. If you use fast charge, you diminish the battery's life expectancy. To add to these worries, the battery typically costs as much as the rest of the car but its life expectancy is just a fraction meaning you'll have some big expenses during your ownership of the vehicle. Additionally there is the problem of the resale value, just how much life is left is that used battery?

Optimists want to rely on battery R&D but the timeframe for a breakthrough, if there is one, is too far in the future to promote car sales today. 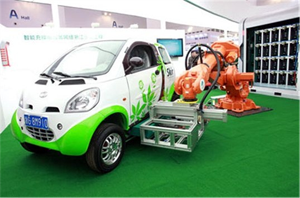 QBEX - Quick Battery EXchange - robot arm
In China they have discovered that the short term solution to the battery problem is not a better battery but a new business model. You cannot sell pure electric vehicles (EV) the way you sell traditional internal combustion engine (ICE) cars.

The first proposal was to sell the vehicle without the battery. The battery would be leased and instead of it being charged by the car owner, spent batteries would be swapped for fully charged ones using the Quick Battery Exchange (QBEX). By transferring ownership of the battery to a leasing company, the car owner would be relieved of the problems created by the battery. The batteries would be charged and maintained by an entity more capable of giving them the proper care. The EV ownership experience would be more in line with traditional car ownership.

State Grid exhibit
Notice the QBEX robot arm to the left
The program was launched with great expectations in 2011. The two major state owned electric utilities were recruited, the provincial and city governments offered copious subsidies yet sales failed to materialize beyond a few hundred to so called "visionaries." One can only speculate about the reasons: maybe a lack of a sufficient number of QBEX stations, maybe a lack of parking spaces, maybe the out-of-pocket cost was still too high despite the subsidies.

Kandi Technologies, the company at the heart of this plan, survived 2011 on the strength of their legacy all-terrain vehicle (ATV) business. Kandi proposed two additional business models. Instead of selling the cars, lease or rent them. 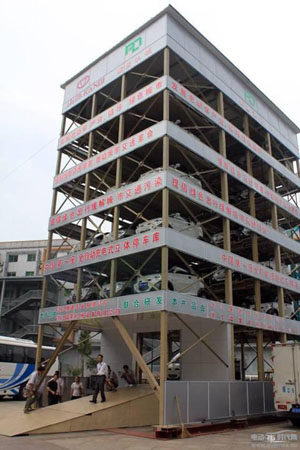 Kandi Rental Car Parking Garage
The lease model would use the QBEX battery swap while the rented cars would have rechargeable batteries. The rental cars are charged in the vertical garages located at airports, train stations, and other convenient high traffic locations.

The first 20,000 car lease program was set to start in August 2012. The first order for the delivery of 5,000 cars by the end of December 2012 was placed but delays again occurred. This time they were of a bureaucratic nature. Initially the EV programs were handled on a province by province basis but it was soon realized that China required a nationwide set of standards if cars were to drive from city to city and province to province. There was also the issue of the change in Communist Party leadership.

The good news is that the infrastructure continues to be built out. Additional cities and provinces are setting up plans for the adoption of pure electric vehicles. Three hundred of the new vehicles have been granted license plates.

Disruptive technology follows in a fairly uniform pattern, uniform enough that Clayton Christensen was able to document it in his book The Innovator's Dilemma. A new technology comes along that is too underpowered to threaten incumbents but also cheap enough that it finds under-served markets. One example Christensen gives is the hydraulic backhoe which was so underpowered that it presented no threat to the mechanical monster excavators of the day but was perfect for digging narrow ditches in urban settings, a job for which no equipment exited at the time. In time the hydraulic excavator took over from the mechanical ones as it developed more power and more capabilities.

Testa Motors is one contender making a lot of headlines and it has its full contingent fans and detractors. One reason why Tesla is not a disruptive technology is that the price is too high, there is no under-served luxury car market that I know of. Tesla is taking the luxury car market head on, where it might or might not succeed, but even if it does it won't disrupt the automobile mass market. The small size --so often derided by American commentators-- and the low cost of the Kandi EV are key features in the disruptiveness of the Kandi model. 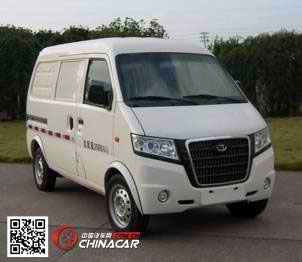 Kandi van
Why don't incumbents develop the disruptive technology themselves, why do they ignore the new technology until it is too late? The reply to those questions is quite complex but it centers on the fact that the new technology is of no interest to the incumbents' best clients. It is seen an neither a threat nor a money maker by the incumbents. This phenomenon is covered in The Innovator's Dilemma as well as in Geoffrey Moore's Living on the Fault Line.

It might seem strange at first that a small, unknown Chinese all-terrain vehicle (ATV) maker should lead the innovation in pure electric vehicles. It is precisely the lack of an existing mass market auto business that allows them to think outside the box, they don't have a market to defend but one to attack. And on the attack they are. Not content to push passenger vehicles, Kandi recently gained certification for its new pure EV van, pictured above.

After the false start last year, 2013 might prove to be the turning point for the adoption of the pure EVs in China. Unfortunate as it is, the record SMOG in major Chinese cities, reminiscent of the storied London Fog, might provide that last push to get the business going.


The Innovator's Dilemma: The Revolutionary Book That Will Change the Way You Do Business by Clayton M. Christensen
Living on the Fault Line: Managing for Shareholder Value in the Age of the Internet by Geoffrey A. Moore
Kandi Technologies -- Private Yahoo! Forum
Investing: Kandi Technologies, Corp. (KNDI) Software Times (October 31, 2010)